With the 2n3819 JFET fitted, it was time to test the receiver once again.

The shack transceiver was tuned to 14.070 MHz. The tip of a short coax cable, from it’s antenna socket, was held close to the PSK31 board’s local oscillator circuit. Key devices here are IC1 and Xtal CR3,  shown in the photo and circuit diagram below. 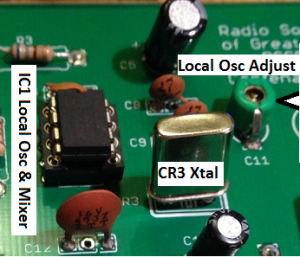 A low frequency audio tone was heard from the shack tranceiver. 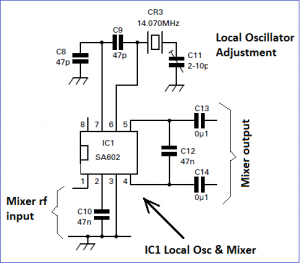 With tuning complete the shack antenna was connected to the PSK31 board coax cable and SO239 plug. The audio cable was connected between the board’s 3.5mm jack-socket, SK1,  and the computer mic input.

PSK31 Digital Mode Software
The DIGIPAN software was already installed on the shack Windows PC. However some settings required adjustment. With the mode set to BPSK31 and Receive ( RX)  selected, the computer mic volume was lowered to reduce the noise on the DIGIPAN screen ( Yellow colour). With a lower audio input level the display  produced a mosty blue background. Now the BPSK31 signals were clearly visible as yellow vertical lines (see screen shot below) 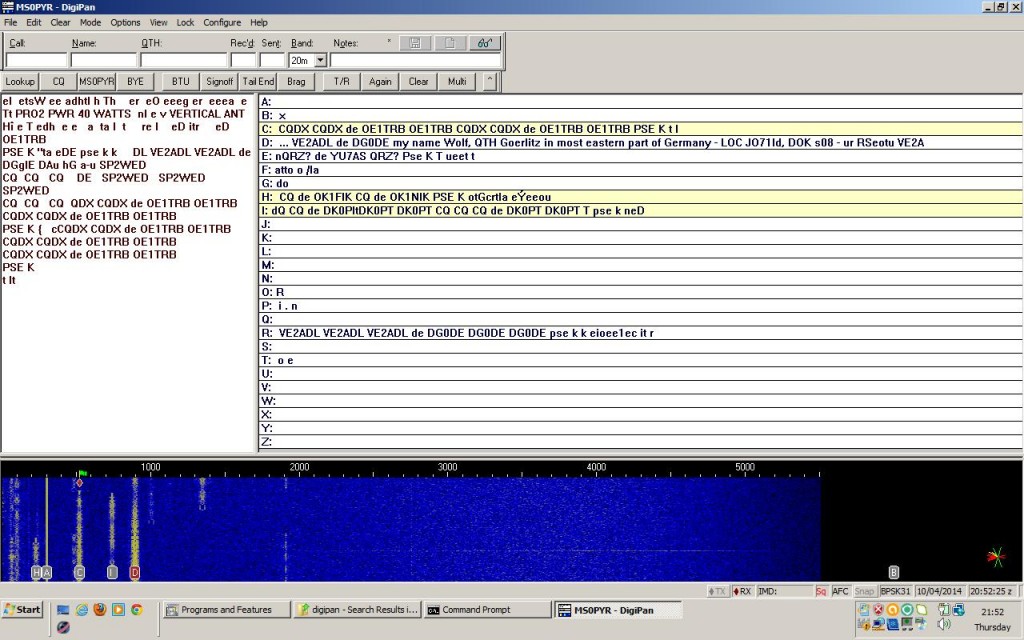 The strong signals received were error free. Some of the weaker stations however contained errors in the message received. This is likely due to the lower signal to noise ratio for weaker stations. Further testing in better conditions on the 20m band are required to confirm this.

Well done MM6LKG (Arthur), for getting the RSGB PSK31 Centenary receiver built and working, completing this project for the Intermediate License practical assesment.

What Next
Now that the board is complete and working it only remains to tidy the project up. Fitting the board, battery, power switch and antenna connector into a suitable enclosure will make it more robust for use in the shack.

Digital Mode Software
Two of the software packages available for digital mode PSK31 include DIGIPAN and FLDIGI. These can be downloaded from the sites below. There are others.

Iconic One Theme | Powered by Wordpress